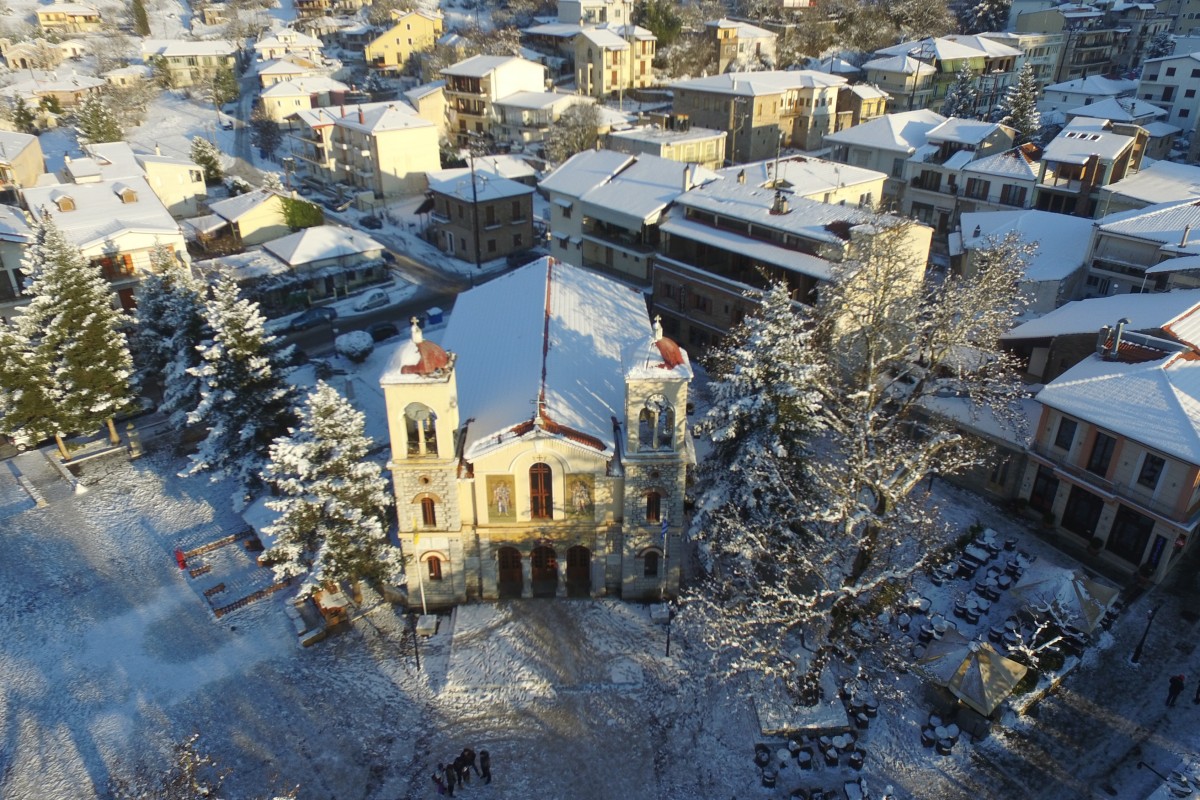 Kalavryta is a town and a municipality in the mountainous east-central part of the regional unit of Achaea, Greece. The town is located on the right bank of the river Vouraikos, 24 kilometres (15 miles) south of Aigio, 40 km (25 miles) southeast of Patras and 62 km (39 miles) northwest of Tripoli. Notable mountains in the municipality are Mount Erymanthos in the west and Aroania or Chelmos in the southeast. Kalavryta is the southern terminus of the Diakopto-Kalavryta rack railway, built by Italian engineers between 1885 and 1895.
Kalavryta is built near the ancient city of Cynaetha.

During the late Middle Ages, the town was the centre of the Barony of Kalavryta within the Frankish Principality of Achaea, until it was reconquered by the Byzantines in the 1270s. After that it remained under Byzantine control until the fall of the Despotate of the Morea to the Ottoman Turks in 1460. With the exception of a 30-year interlude of Venetian control, the town remained under Turkish rule until the outbreak of the Greek War of Independence in 1821, in whose early stages Kalavryta figures prominently: it was here that on 21 March 1821 the flag of the revolt was raised at the monastery of Agia Lavra by bishop Germanos III of Old Patras.
At the end of 1943, near Kalavryta, 81 German soldiers, led by Hauptmann Johannes Schober, were captured by Greek Partisans. Four Germans were killed on the spot.Three were taken to hospital at Kalavryta but were later shot by the furious partisans.The rest were initially treated as prisoners of war, until most were shot dead and some plunged over the cliff near Mazi from the force of the shots. Two German prisoners survived the execution and raised the alarm on the following day 8 December 1943. On 13 December 1943, in retribution for the killing of the captured German soldiers, what is commemorated as the Massacre of Kalavryta, German troops ordered all male residents of Kalavryta, aged 14 years and up, to gather in a field just outside the village. There, they machine-gunned down 696 of them. Only 13 survived. After that they burnt down the town before they left and the next day they burnt down the Monastery of Agia Lavra, birthplace of the Greek War of Independence. Post-war, the federal Government of Germany offered gestures of atonement in the form of free school books for the high school, scholarships for orphans of the massacre and the building of a retirement home. However, no German commanders, (e.g. Major Ebersberger who carried out the destruction of Kalavryta; Hauptmann Dohnert who led the firing party), were ever brought to justice for their crimes.