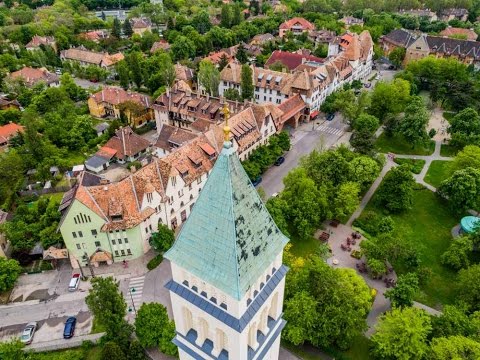 © All rights reserved - by marciart
Construction began in 1908, and until 1925 when the Great Depression forced to abandon further development, 1007 houses were built containing 4412 apartments. One-story buildings placed along smaller streets had 2,3 or 4 individual apartments, and two-storey 6,8, and 12-apartment houses lined wider streets, forming a unique "spider web" street layout, centered on a round square with a large park in the middle.

Kós Károly Square, Wekerle estate
Between 1911 and 1914, four schools and two kindergartens were completed with 48 classrooms, 18 kindergarten rooms and 2 gymnasiums. The police headquarters and barracks for mounted police were finished in 1912.
Priority was given to government employees among rent applicants, but the estate, being very popular from the beginning already had 25% of its population from the privately employed, mostly workers of nearby factories.
According to the government's concept (most of the renters would be young, often unmarried clerks and low-level government officials), the majority of the houses include small apartments. The most common arrangement is the 45 m2 two-room apartment in 12-apartment complexes. 3-room 59 m2 apartments are also common. Larger units are rare, there are a few larger apartments in the 2-storey buildings on the central square. There's a handful of distinct, almost villa-like housings with larger apartments, referred popularly as "headmaster's house" or "doctor's apartment", the name probably stemming from their originally intended function.
The main, central square was very important for the concept of "building for the community", thus planning of the main square was a separate project, won by Károly Kós one of the star architects of the period. He designed the arrangement with the radial street layout and also one of the trademark wooden gates (the eastern one). Many of the famed architects of the era (e.g. Lajos Schodits, Béla Eberling, Dezső Zrumeczky, Gyula Wälder and Dénes Györgyi) designed houses on the square.
Mes huskys en pic-nic
walk-in-the-air
marciart
725 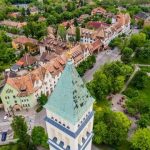