Vivid yellows and reds cover the landscape for miles. Autumn at its best! 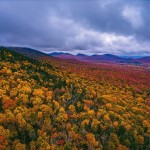